What is Hosted VoIP? 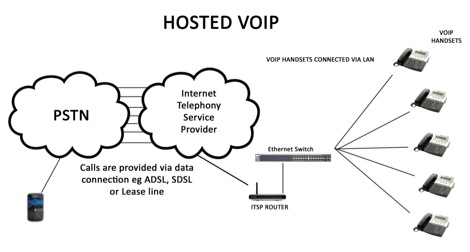 Hosted VoIP or managed VoIP can save companies a lot of money because they don’t have to invest in the equipment. We are talking about a system which manages calls and routes them to and from the subscriber’s existing telephony system. Unlike the circuit-switched telephony that uses the traditional Public Switched Telephone Network or PSTN, hosted VoIP uses packet switched telephony to transmit calls over the internet.

Asterisk is a software implementation of a telephone private branch exchange (PBX); it allows attached telephones to make calls to one another, and to connect to other telephone services, such as the public switched telephone network (PSTN) and Voice over Internet Protocol (VoIP) services.

There are many benefits to using hosted VoIP rather than a traditional phone system, for example these services cost less to set up than an on premise PBX. Sometimes the set up can be free of charge because these services fall under the operational expenditure rather than capital expenditure. Another benefit is that your set-up and installation will be taken care of by the hosted VoIP providers, this means that you don’t need to be a telecom or VoIP expert in order to get hosted VoIP. Hosted VoIP can replace your business phone system with a future proof voice over IP solutions that is hosted entirely in the cloud. All the functionality of an on premise enterprise BPX is received along with other features that enhance productivity, extra features and add-ons depending on the platform.

Another benefit of hosted VoIP is that this services optimizes your option to stay in touch with unified communications. It improves every feature and offers you chat, presence, softphone, video calling, screen sharing and SMS texting. Other services that include VoIP technology can enable a lot of calling features that can improve efficiency and communication with customers and colleagues.

Hosted VoIP can provide customers with the highest level reliability in the industry regarding the superiority of the voice quality. It can prioritize voice traffic from end to end on it private.

So all these features like lower cost rate, better quality, faster installation of the service can represent a big boost for your business.


Categorised in: Did you know, VoIP

Copyright (c) 2022, VoiceMailTel - All rights reserved.
Demo Number Free Trial Contact Us
We use cookies to ensure that we give you the best experience on our website. If you continue to use this site we will assume that you are happy with it.I acceptRead more